YOUniversal is a game-changing mobile system that lets Arkansas high school students apply for scholarships from 21 state programs in less than five minutes – all from one app on their phones.

We save about $500,000 a year just on postage and paper that we’re no longer using to process applications. We don’t have to dig through stacks of paper and match students to their correct eligibility, and it takes fewer staff because we can sort things electronically through YOUniversal.
– Dr. Maria Markham, Arkansas Department of Higher Education

In 2009, the Arkansas Legislature passed a law requiring the state’s financial aid application process to move online by January 1, 2010, to accommodate an influx of financial aid awards from the new Arkansas Scholarship Lottery. This meant the Arkansas Department of Higher Education (ADHE) had six months to completely re-engineer and digitize its paper-based process, and help students find scholarships for which they are eligible in a simplified way online.

The Arkansas Department of Higher Education (ADHE) had been managing the financial aid process 21 scholarship programs from different government entities into one database, and fast. The new system would need to apply a series of business rules, which take basic information from the student or parent and return a list of scholarships for which the student may be eligible to apply. 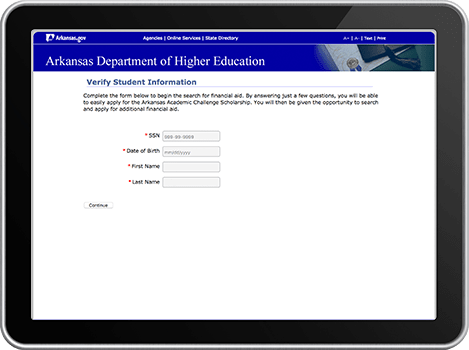 The department partnered with the Information Network of Arkansas to develop the YOUniversal Financial Aid System in a phased approach that began with the student-facing scholarship application and continued with the development of back office administration, management and reporting tools.

The mobile system consolidates 21 programs from different government agencies in one database and then matches each student applicant with qualifying scholarships. The result is an easy to use tool that walks Arkansas students, parents and counselors through a series of questions to find and apply for available scholarship funds in one place.

An administrator extranet has a workflow process and role-based user authentication that allows users with different access rights to easily add, delete, view, and edit information. This also ensures access to information is limited based on the user’s defined role in the system.

Since launch, ADHE has continuously enhanced the system with new feature updates and technology refreshes that keep YOUniversal relevant to a generation of mobile-heavy users. One of the latest feature releases includes the ability for public high school seniors to claim an account that ADHE pre-created for them and apply for the Arkansas Academic Challenge Scholarship faster than ever. This new feature also creates more accuracy for the agency as the existing accounts pull verified student contact information and transcript data from the state’s database and eliminates data entry errors from students who create their own accounts.

YOUniversal has driven incredible efficiency and cost savings for several government agencies, and has dramatically improved the financial aid application experience for students.

ADHE sees significant savings in staff administrative work, postage and paper costs as the system has automated many of the manual functions that were previously done to join information from disparate systems. Before YOUniversal, ADHE had to print and process four sheets of paper and send two postal mailings to applicants per application. Now that YOUniversal automates the application process and does not require a paper signature page, ADHE has saved more than an estimated $392,215.32 in postage costs alone.

State universities and other government agencies that play a role in financial aid administration also benefit from the automation and reporting features of YOUniversal that have replaced their time-consuming manual interactions with ADHE.

Applicants are now able to get an instant scholarship eligibility response, apply online, check the status of their applications and accept their awards using a mobile phone. This automation has reduced staff time in processing applications from an average of 10 minutes to 3 minutes, enabled staff to process a much higher volume of applications each year without adding additional employees, and allowed staff to process transcripts for the new Academic Challenge Scholarship program, which came about after YOUniversal was in use. Overall ADHE staff time savings through YOUniversal is conservatively estimated at 8,100 hours, which is valued at $147,258 based on the average annual salary of Arkansas state employees.

Under the previous paper-based process, all financial aid applications required heavy manual processing. With YOUniversal, 97% are fully automated and require no human intervention.

The time savings from digital automation of a paper-based process has enabled ADHE to keep pace with a sustained increase in financial aid applications that occurred when the state’s Arkansas Scholarship Lottery launched in January 2010. Program Administrator Phil Axelroth said it best: “Without the YOUniversal system we would have been unable to handle the volume from the Academic Challenge Scholarship changes due to the lottery funding.”

The application process for students has been dramatically simplified. What once took hours now takes mere minutes to complete on a phone. Students and counselors no longer have to mail paper applications to ADHE. The postage savings for constituents is estimated to equal the agency’s $392K in savings.

Beyond the cost savings to government and citizens, the biggest impact of YOUniversal is this: More high school seniors applying for and receiving scholarships, and ultimately attending college because of it.