Arkansans can claim lost property in minutes on their mobile phones and receive checks in a few short days, thanks to an innovative online filing system designed by the Arkansas Auditor of State in partnership with INA.

SAVED for Arkansas since 2013

"ClaimItAR has allowed us to more than double what we’ve given back. The highest year previously was about $7 million, and last year was $18 million. So it’s pretty significant, over 150% increase."
— Auditor of State Andrea Lea, Arkansas Auditor of State

Each year, millions of dollars in unclaimed property are given to the Auditor’s Unclaimed Property Program by companies that cannot find the owners. Since 1988, claims filing required printed forms and documents to verify identity. The process was so cumbersome that it took up most of an auditor’s time and kept people from making small claims.

The Auditor’s office had only nine employees processing more than $40 million in claims each year. More than 90% of their time was devoted to handling small claims (less than $30 each) that could be entirely automated through a digital process. The office needed to automate simple claims processing tasks so employees could focus time on more complex claims, such as those involving estates and trusts with multiple claimants.

The old way of filing a claim was just as frustrating for citizens. Before online filing was in place, citizens had to find their name printed in a special section of statewide newspapers once a year, call the Auditor’s office, complete and mail back claims forms along with copies of their driver’s license and other documents that verify their identity, and wait 30 days or more to receive their check. The number of steps and time involved caused many claimants to abandon their claims mid-stream or not even file a claim in the first place. 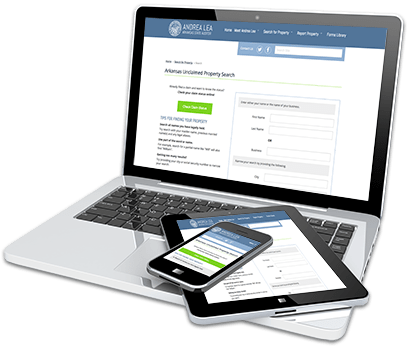 That all changed in 2013 when the office partnered with INA and became the first in the nation to fully automate its process and offer mobile-friendly claims filing. The process for a claimant is simple, but behind the scenes a sophisticated business process with a unique identity verification system allows most claims to be filed, processed and paid without human intervention.

ClaimItAR.com is an entirely digital, paperless system that uses responsive design so citizens can claim property and check claim status from any mobile device or computer.

Claimants conduct a search by entering their first and last name or business name. For greater accuracy, searches can be narrowed by city and / or social security number. The system helps claimants find property by presenting relevant results first and offering to display more related results, if needed.

Claimants can also check the status of a claim that has been filed by entering either the claim ID or their social security number. The Auditor’s office updates the status of claims each day at 9 a.m. and 5 p.m.

Automation has streamlined operations and more than doubled the number of claims filed since 2012. That year, the Auditor’s Office paid 7,554 claims worth $7,272,205 under the old, paper-based claim filing process. In 2016, after three full years of electronic filing, the office handled 354% more claims worth $18.6 million. That’s a 156% increase from when it was a paper-based process.

ClaimItAR.com has also resulted in faster processing and delivery of checks. An overwhelming majority of claims are completely filed online. Those claimants received checks within seven days versus 30 days through paper filing.

Because the online filing system is accessible from any device, is easy to use and requires fewer steps than the paper process, more citizens are filing claims. The percentage of claims filed grew 134% in the first year of system use and continues to rise each year.

ClaimItAr.com has completely automated the claims process for simple claims and human intervention is no longer needed in these instances. Nine state employees who were devoting 90% of their time to manually process small claims under the paper process now use that time to focus on complex claims and other important tasks that need their attention. If those employees leave the agency, the Unclaimed Property Division could choose to operate without backfilling the positions.

Due to these process improvements, the agency is able to handle a greater volume of filed claims with a potential decrease in staff. Considering those claims required little to no human intervention, the Auditor’s office is dramatically increasing its filing volume the equivalent to doubling its staff (estimated at $700,000 in personnel and matching) without adding positions and paying only pennies on the dollar for processing fees.